Join the Litchfield Historical Society for a month of talks, videos, activities, and more examining Litchfield’s own Benjamin Tallmadge, the spy master for George Washington. 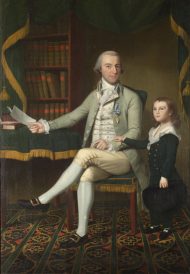 Join the Litchfield Historical Society for a month of talks, videos, activities, and more examining Litchfield’s own Benjamin Tallmadge, the spy master for George Washington. We will be going virtual on Facebook, Instagram, and Zoom to uncover Tallmadge’s work during the American Revolution and his life in Litchfield.

Be sure to check back often as we update our events!

Learn all about the network of spies Tallmadge organized.

Coffee with the Curator – Painting the Revolution – 10:30 a.m. on Zoom

The Litchfield Historical Society collections contain four distinct portraits of Benjamin Tallmadge. Join our Curator of Collections to take a closer look at Tallmadge’s two wartime portraits, before examining the wider role of American artists such as John Trumbull in capturing (and often creating) the visual history of the American Revolution.

This week will explore the code book the Culper Spy Ring used to send coded messages. Using the code book, viewers can try to decode an actual coded letter from the Litchfield Historical Society’s collection!

Coffee with the Curator – The Many Ventures of Benjamin Tallmadge – 10:30 a.m. on Zoom

Like many men of his time, Benjamin Tallmadge’s business interests were diverse. They included shares in privateering vessels during the Revolutionary War; a mercantile enterprise in Litchfield where he moved after the war; shares in a China trading venture; and land speculation in the Western Reserve.

The Culper Spy Ring used invisible ink to protect the information in their letters. Learn the techniques Tallmadge and his spies used and make your own invisible ink!

Our galleries are dotted with portraits of figures from Litchfield’s past. As historical objects, portraits can tell us much more than just what people looked like. Each portrait holds clues about the experiences, ideals, and ambitions of the individual sitter as well as what life was like at the time of the painting.

The Culper Spy Ring used a cipher to conceal words not in the code book. Follow along as we explore how ciphers work and make our own cipher wheels to write secret messages!

Coffee with the Curator – Life in the Shadow of Benjamin Tallmadge – 10:30 a.m. on Zoom

Nearly everyone has heard of Washington’s spymaster, but less is known about Mary Floyd and Maria Hallett (the two women who married him), his daughters, or his domestic help. Join our Curator of Library and Archives as she explains how we uncover information about underrepresented people in history and tells what we know about the other people who made up the Tallmadge household.

These aren’t masks for your face! In our final week, we will look at the Cardan system and masks used to hide a letter’s true meaning.

Grab a cocktail, mocktail, or beverage of your choice and join the Litchfield Historical Society for a virtual lecture program that brings conversations about history to you at home.

A culmination event of all things Benjamin Tallmadge!

Secrets of the Spy Master: Decoding the Tallmadge Story is sponsored by

Thank you for your support!